I entered the world of Triathlon way back in 2006 (aged 33), starting with the Blenheim Sprint distance event. Having entered with only 8 weeks’ notice via a charity place I knew it was never going to be pretty! I hadn’t even been on a push bike since my teenage years so even a 20km ride was going to be tricky. Completing the event was only the start of my exercise and triathlon journey, and yes it wasn’t pretty!

Immediately catching the bug I entered the London Olympic distance Triathlon of that year, talk about pushing yourself! It was entering this event I noticed there was an entry available for those who had completed and were capable of doing a standard/Olympic distance tri in 2 hrs 30 mins, which gave them preferential start times, racking, etc. Having just completed the Blenheim in just approx. 1hr 40mins I just knew that was never going to be achievable for me. This is the results from my very 1st Olympic distance triathlon.

A very humbling 3hr plus, yet still an awesome achievement for someone very new to the sport. 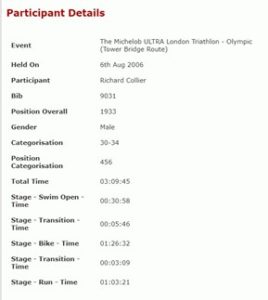 Over the next couple of years I entered more events, mainly sprints and Olympics distances, getting little quicker but nothing too dramatic. I just enjoyed the challenge of actually completing the events, and the buzz it gives. By the way, I was a smoker at this stage, smoking approx. 20 – 30 a day!

Then life got in the way! August 2008 was my last triathlon for a number of years. Due to personal circumstances I couldn’t concentrate on training, and with limited weekends available I couldn’t enter the events. To

It was during a drunken evening with friends back in 2013 where a mate just happen to mention he was doing the 1 mile great north swim; and I thought why not! And my journey began again. The swim didn’t go well at all, in fact it only lasted 300 yards as it appeared that the wetsuit had shrunk quite considerably in the 5 years of not training or exercising! Nothing to do with the extra 10kg of weight of course! Being able to breathe while swimming is quite important apparently!

In 2014 I entered a few standard distance triathlons but still struggled to beat the 3 hour mark! Then in 2015 I finally managed to drop the smokes, quitting just 4 weeks before an Olympic distance event in Eton Dorney, and managing to get the magic 3 hour mark; well not quite, as I was 3 hrs and 41 seconds! It was later that year in Bala, North Wales that I beat the 3 hour mark. It’s amazing what difference it makes when you’re not filling your lungs with smoke!

In 2016 I then decided to start going long, and entered my 1st Middle distance tri the Cotswold Classic down at Cotswold Water Park. Realising that I was never going to be quick, I decided to go long instead. I finished my 1st 70.3 distance Tri in 5hours 53 mins and was absolutely exhausted! I remember the 1st words out my mouth. “I’m never doing that again!” As many who do triathlons will testify, my wife was absolutely correct when sarcastically she said ”yeah, right!”.

So in 2018, I decided to go even longer! Achieving my first Iron Distance in 12 hours 15 mins, but the achievement was far more important than the time. I decided to concentrate on middle distance events from then on, but always wanted to do the end of season Olympic distance at Eton Dorney, just to see where my speed and fitness were. I managed to get my time down from just over 3 hours, to 2 hours 41 minutes, then to 2 hrs 37 minutes, but secretly always aspiring to get that allusive 2 hr 30 mark. But thinking again, “I’m going long distance, not built for speed, I’m late 40’s now!”

2019 was iron / full distance again, with a few middles, and then 2020 happened! Needless to say everything got cancelled. But I carried on training, knowing that the events would come back. In 2021 I hit the middle distance mark I wanted by smashing my middle distance mark of 5 hrs 30 mins by completing the Lakesman half in 5 hrs 29 minutes….I was so happy! But the 2hr 30 mark for the Olympic was still in the back of my mind.

I felt good, my training has been going well. My time trialling on the bike has achieved numerous PB’s this year, and my running has improved with the track sessions put on by the club and the introduction of a coach to help keep my training on track with accountability and a better structure, as well as a clear strategy for race day. Could today be the day?

Arriving at the venue I could see that it was perfect race weather. It was overcast but not wet, and approx. 15 degrees temperature at the start of the day, with very little wind. I had to be careful on the swim as I didn’t want to go all out and exhaust myself but I knew I couldn’t go easy. Leaving the swim in just under 28 mins on my watch I was on course with the times I had in my mind. Transition 1 went ok and I was on the bike, knowing that I could do the 40 Km in somewhere just over the hour, coming in at 1:04 ish. Leaving just the run. The run in the past has been my nemesis, I’ve never been a quick runner, preferring to go long, and focus on endurance rather than speed. Following a recent coaching strategy I decide to build into the run, rather than going all out from the start. I kept my heart rate at a reasonable level for the 1st 5km lap, thinking that if I can do the same on the 2nd lap I’d be somewhere close to where I wanted to be. My watch was on the run segment, rather than overall time so I didn’t know what the time was. I felt strong once I hit the 4 mile mark so I decided to push the Heart Rate and pace a little. Mile 5 mark came and I then thought, let’s go for it. The last mile was a sub 8 minute mile (which for me is amazing, having struggled for so many years at 10 min miles), coming in with a sub 50 minute 10km!

Stopping the watch across the finish line I quickly checked the overall time on my watch; I’d done it! 2 hours, 28 minutes and 17 seconds! Boom!!! The elusive 2:30 mark finally beaten! My official time was actually 2:28:22 but still way under the 2hr 30mins I’d been longing for since I started triathlons 15 years ago. I’d never told anyone my goal or dream, always thinking it was never achievable and that I could never do it, especially as I’m not getting any younger. But I was always secretly hoping that one day, maybe, it would happen. Well, today it did!

So what’s next? Well, next year my ‘A’ race is the Lakesman full distance tri and I’ll be looking to take 15 minutes off my previous best and get under the 12 hour mark. I’ll also be looking to get somewhere close to the 3:45 mark for a marathon, as well getting under an hour (officially) for a 25 mile TT. More importantly though, is to enjoy the events and my training. To quote Vassos Alexander of Chris Evans radio breakfast show fame, “Don’t let your time ruin your time”.