The Famous Five – comprising Ben, Nick, Annie, Denise and Blue (the dog) set off on the journey across the border to Wales, along with all the caravans on a Friday evening, but the Famous Five have the ability to talk the hind legs off a donkey (ok, Blue didn’t really get a look in) and the journey flew by.

We quickly realised our collective ages when we arrived at our accommodation – it’s been over 25 years (for one participant) since student life and these were definitely student digs, but pretty smart ones at that although the realisation that the pizzas we brought with us were going to prove a little difficult to eat without an oven in the house was a pivotal moment.  However, rescue chilli was rustled up and all was good in the world of the Famous Five (albeit that Blue didn’t fancy the chilli). 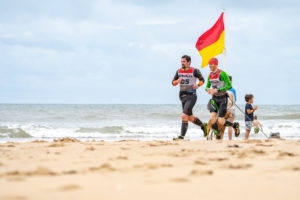 Race day arrived and a relatively civilised start time compared to some triathlons – wetsuits were donned, flotation devices and paddles attached and we were ready to go.  Blue was shipped off for doggie day care and we all piled into buses taking everyone from the finish/congregation area to the start and all we could hear were mutterings from locals of “I wouldn’t have taken that road” as we wended our way through the back (and very narrow) roads of Gower.

For those who haven’t heard of this new fangled SwimRun format, the rules are pretty simple – in our case, do the course in pairs (Ben and Nick; Annie and Denise) and get round keeping within 10m of each other.  Otherwise, add on as many toys as you like for the swim leg but bearing in mind you’ll have to carry them for the run and judging by some of the comments that were overheard, some toys proved not so much playtime as relationship stretching. 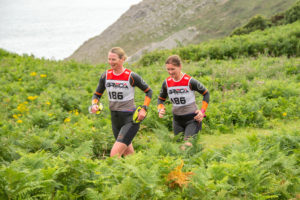 We all set off as one group on the lovely sandy beach of Oxwich / Great Tor looking out at the calm serene sea and lulling us into a false sense of security with a flat trot along the beach for 2.9km. Both Cherwell teams made good progress through the field after starting towards the back, with the sand fairly firm underfoot, until the first swim to Three Cliffs Bay was reached. ‘Just’ a 700m swim around the headland, but with a swell and waves that made for interesting sighting and swimming. The proximity of the cliff made the swell even more pronounced – no chance for any Famous Five type smugglers to get near to! 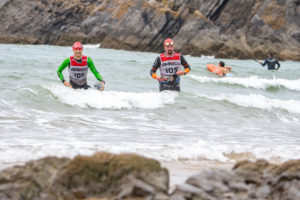 Then it was onto the longest run of the event which brought the reality of the race into sharp focus – 7.8km with a steep, calf stretching, sand mountain climb at the start. It was at this point that most of us established that leaving the sleeves on our wetsuits was not a good idea (boil in the bag triathletes). 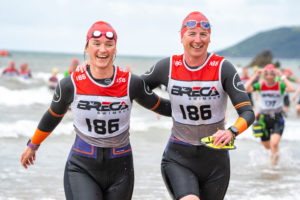 Having got through this first swim (with Nick cruising effortlessly through the swell whilst Ben floundered in his wake) it was almost inconceivable that the second dip would be welcomed, even looked forward to, but the tough overland section made the cool water of the second swim a primary goal. In the ladies’ team Denise then decided to pick the flattest part of this run to trip over a pebble and land on a rock, but in hindsight that was just a ploy to bring Annie’s supreme cheerful and positive traits into play for the remainder of the race and she bounded on with Denise in tow unable to feel sorry for herself in the face of such aggressive jollity. Meanwhile ahead in the field, Ben and Nick were split between feeling like they were about to internally combust (Ben) or getting a bit chilly with the breeze (Nick). Onwards to three more swims and three more runs covering a total distance of 20km up and down coastal paths and rocky headlands and bays to the finish. Both teams came in smiling and both were placed 7th in their categories – a burger and lashings of ginger beer (and other beer… and cider… and wine…) followed to round off a challenging but satisfying (and visually stunning) race. 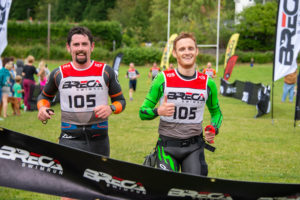 Verdict – a tough race demanding a different kind of fitness than we were used to. Certainly one to be treated as a learning curve. But would we do it again? Absolutely! – but only if we get rid of the arms of our wetsuits and we get piped to the finish as the racers got at the Scottish version. 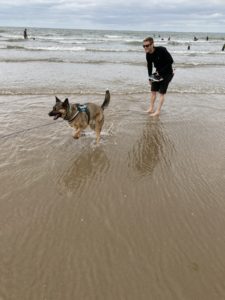