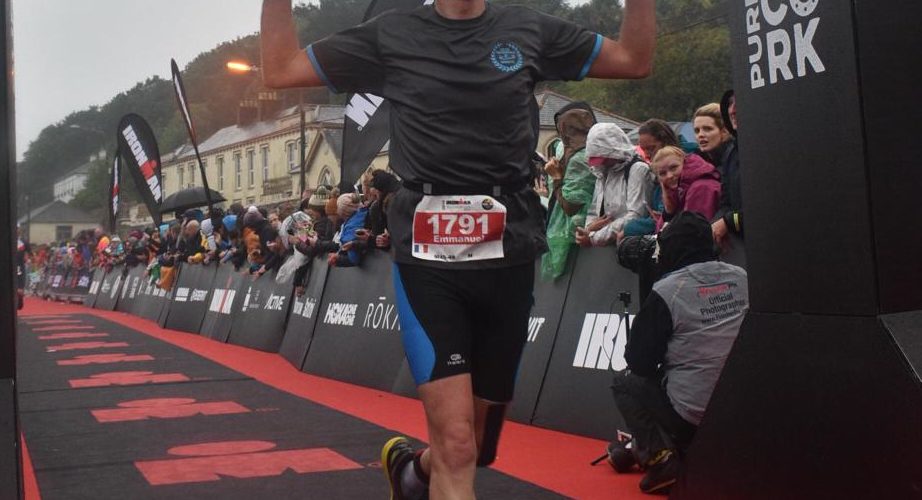 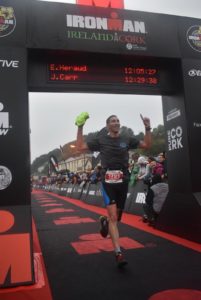 I started out in triathlon about five years ago,
I wanted to tick the boxes and try every distance. After successfully getting through Isoman last
year, I wanted to try the full distance – the Ironman. For some reason still unknown to me, I
listened to Annie and registered for Ironman Ireland. I thought the logistics would be easier as I
could drive to the race rather than flying with my bike. Unfortunately I did not think about the
weather!
Despite a very sunny Saturday, we knew that a storm was coming. I could not sleep much as I was
a bit stressed. I woke up at 3:00. The rain and wind were already quite strong. I arrived at the
transition area around 4:45. There was nowhere to stay dry so we just waited in the rain. There
was rumours that the swim might be cancelled because of the extreme conditions. The safety
people tried to get out to sea with their kayaks but clearly struggled. I was so happy when they
asked us to put our wetsuit on: the swim was on. But unfortunately, 10 minutes later, they
officially cancelled the swim. I was completely frozen and started to shake. As the bike ride had to
start by waves, I started at 8:45, two whole hours of chilling down after I had been prepared to set
off. Frozen, shaking and completely disappointed I set off. Nevertheless, I quickly started to try
and concentrate on getting the rest of the challenge done. I put a lot of extra layers on as the rain
was heavy and cold, and managed to stay slightly warm on the bike. I tried to stay ficussed all the
time as the road was very dangerous. I had only one thing in mind: do not fall. The course was
quite hard with a very long hill over 10km. There was also a very steep hill of 21% at the end of the
90km loop, so we had to do it twice. Having had a pain in my knee, I didn’t even try and ride my
bike up the hill…so did most of the people including the first pro rider anyway!
I finished the bike in 7h15 so I was very pleased.
I started the marathon with a big smile: I had succeeded the bike! The running in the rain was not
an issue. As usual I went too fast on the first lap, but managed to keep smiling all along the run.
The idea of finishing on the famous red carpet kept me going. Finally, after 4h35, the voice
confirmed ‘you are an IRONMAN’. 12h05 was very good and better than I had ever expected, even
without the swim. I was very happy to finish knowing that 1200 people out of 2600 did not finish
yet I did.
On a more positive note, the support was amazing despite the weather. People supported us all
day long!
As I had a strong feeling of “unfinished business”, I registered for Ironman Italy this September.
Fingers crossed for better weather!
And this time I did not listen to Annie when she tried to convince me to redo Ireland next year 😉