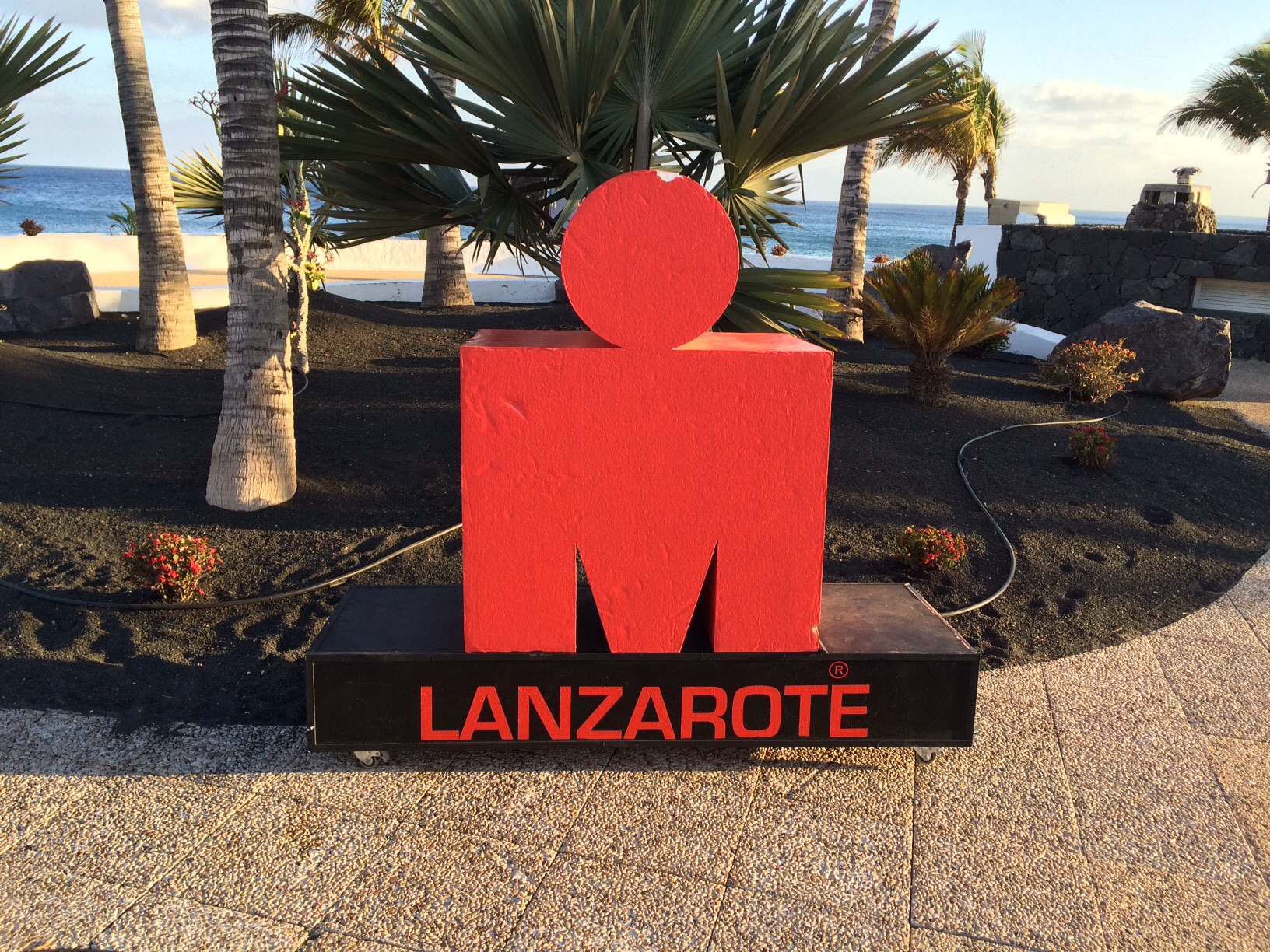 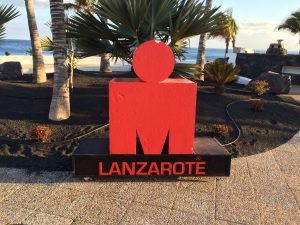 My journey to becoming an ironman started 7 months ago. I’d always thought I’m going to do an Ironman, but never thought I’d actually say “I’m doing an Ironman”! This journey was about conquering my fears and realising that I am good enough. Challenge your limits, overcome pain and overcome moments of weakness. It’s only when you push the boundaries of your self-imposed limitations that you find out who you really are.

Why, Lanzarote from more than 250 in over 42 countries across six continents, maybe because it’s crazy. Ironman Lanzarote has carved its unique legacy as the toughest Ironman on the circuit, yet at the same time climbing slopes of volcanoes and weaving through fields of solidified lava and eerier rock formations is a unique experience. I’m doing one and only one Ironman, it has to be the biggest, toughest one, and then when I’m done there’s nowhere to go!

I found myself discussing my plans with Coach Annie Butler. She would plan my life for the next 7 months. An Ironman is not a solitary effort. Though you’re the one doing all the training and racing, it directly impacts all elements of your life. Countless early morning and evening session, all the hours in the water, on the bike or on the run. The bar would be raised inch by inch. Training 8; 16; 19 hours a week. Commitment to the training is tough, but Ironman deserves the respect that is given. When I stood at the start line I knew I would be in the best shape of my life both mentally and physically. I would be ready!

4 days before the Ironman, I travelled to Lanzarote along with my bike and a whole load of kit.

Arriving a few day’s early gave me time to visit the swim start and time to acclimatise, soak up the atmosphere.

I’d never done a sea swim before, but I wasn’t nervous about the swim more about the fish! The sea was quiet choppy that morning. I kept secretly trying to reassure myself it’ll die down by race day.

The heat on my practice run was stifling even at 5pm. I returned to my hotel absolutely drenched. I was going to run a marathon in this! I tell myself it’ll be dark by the time I get off the bike.

The bike build and check ride had become a group event, there were many athletes doing exactly the same thing. The athlete buzz had begun to build and talk seemed to focus solely on the wind. It’s Lanzarote, there is one thing you can guarantee race day is wind! You ride out with a headwind, turn when expecting a tailwind get a headwind instead – expect it and embrace it. 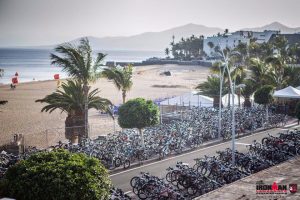 Time to rack my kit in transition. The atmosphere was electric and I’d never seen so many bikes. I felt intimidated at first with so many athletes.

I tried to look professional ha! My bike had a little attention and I started to do what I do best ‘chatter’! I soon became an “Iron Geek” talking race tactics, and buying up half the Ironman Store!

The day I’d been waiting for was imminent all I could do now was carb load, sip water, stay off my feet and out of the sun, and try and get some sleep! This felt like the longest day.

I woke up on the morning of the ironman to the sound of my 4am alarm. I felt pretty calm.

I ate some Weetabix and four slices of toast with Strawberry Jam, and in transition for 5:30am. I pumped my tyres, checked my bags, put my wetsuit on and managed to see some friendly Team Cherwell faces – Dawn, David and Ian one final time before walking down to the beach.

The air of anticipation, nervous and excitement caused a certain calm and quietness.

I really looked forward to the swim. I decided to go middle right to avoid the washing machine as much as possible. I found quite a roomy space at fi 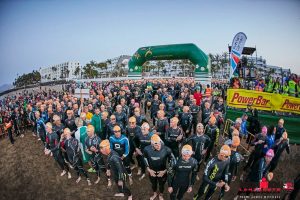 rst, then all of a sudden a surge of athletes was upon me. The narrowness of the pen meant we were crammed in like sardines. I was being carried forward in a frenzy of athletes. I hit the water and imminently panicked and froze, people were swimming under me and over me. I flipped on to my back for what felt like 10 minutes. That’s it I was done…! This couldn’t be it… I took a deep breath and rolled back, I found my line and the congestion had eased I soon got in to a rhythm. I found some feet to hang on to, although the first set of feet were doing some pretty shocking sighting! 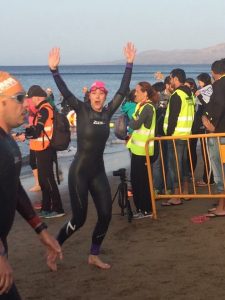 Before long I emerged from my first lap, I wretched from the sea water, I’d swallowed a lot at the start. I heard a cry from the crowd; this gave me a real boost. One more lap to go!

The second lap seemed to go much quicker.

I’d swallowed a lot of water, my mouth felt dry and I started to see stars, but I’d started to really enjoy it. I was so chuffed with my swim, considering all my long training sets. 1hr 27 minutes. My time gained me 50 minutes on the bike.

This was the discipline I wasn’t looking forward to. I had driven the route with Dawn, David and Ian. I knew when to push and how hard.

There is a lot of climbing all the way through the 180km. The winds were brutal and really get you down and frustrated. There were bikes at points in the race diagonal as the crosswinds were really awful. You have to be confident and mentally strong to keep you up right.

One of the major climb, a 17km stretch of climbing in to the wind. A tough slog to the top of Haria where you’d wretch on the bike, you yell, you use very bad language, and you cry. This climb was shortly followed by the last major climb at 108km to “google earth” Mirador before you could refuel and head down to the cut-off point. I hit a steady 27mph average on the decent. You pushed hard even going downhill. I’m not strong or too confident on the downhill and I have a fondness to hammer the breaks, so the headwind played in my favour. I eased my death grip and relaxed. I passed the timing mat and no one stopped me – I knew I’d made it before cut-off, I could actually do this! I inhaled my sandwich. The best jam sandwich ever!

My back, neck and knees were screaming. You just put your head down, plod and smile through the pain! The smile on my face when the bike was over was huge! 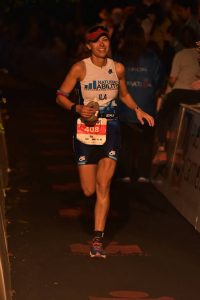 The run never concerned me, I hadn’t expected to survive the bike. You have to mentally break the marathon down. The 1st lap was a half marathon, then two 10K loops. I had gained nearly 7 hours.

The sun cream tent made me “sit down” I think I needed it, but I almost lost myself – I didn’t want to stop, even if I was only for a few minutes. After being smothered from head to toe I was off! The pain started almost instantly. I started at 9 minute miles, ended on 14 – 15 minute miles, the run was more like a shuffle – I was hardly moving. The simple act of lifting your foot off the ground to take the next stride seemed immensely difficult.

The cheers throughout were amazing. As I approached the finish line, I had a standing ovation as I passed bars and restaurants. I thanked everyone I could. I even high-fived my dad without realising!

When I crossed that finish line it was just amazing to hear those words – “You are an Ironman”. That moment will stay with me forever. What a day! 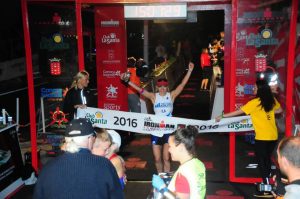 Kenneth Gasque, Race Director came over and congratulated me, he held my hand and said “I’ve never seen anyone smile so much”. A hugely proud moment for me. What an achievement.

The experience, the friends, the journey is what makes and changes you. Anything really is possible if you want it bad enough. My goal was to finish, which changed to 16hrs and then 14hrs. I hit it in the middle, finishing in 15hrs and 7 minutes.