Middle distance triathlon, 70.3, Half Ironman – it goes by different names but the distances are the same: 2km swim 90km bike and a half marathon run. I really enjoyed Team Cherwell’s informal IronBan 70.3 event organised by Henry Sleight. I completed it as a “Long Course Weekend”, where you complete one discipline a day. After the kind words of support and encouragement from members of the club I decided it was time to do my first 70.3 to prove to myself that I could do it all in one day. 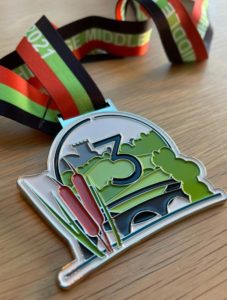 Do3 were organising the inaugural On The Edge Middle Distance – aptly named, as it climbs and then follows the Edge Hill escarpment. I liked the look of the hilly bike course and the mixture of trails and lanes on the run, all set in the stunning grounds of Compton Verney. “Challenging yet scenic” the organisers said, so I signed up. Then, with just four weeks to go, whilst jumping around in my front room to the penalties in the Euro finals, I hurt my MTP joint (the one by your big toe). As swimming and bike was fine Do3 were great and we considered making my entry a relay, but whilst my head said “don’t run” my heart said “go on give it a go”. So my new plan was to work out the cut off time and do a slow steady run/walk within the hours available.

The swim takes place in the Capability Brown designed lake right in front of the main house with a deep water start. After being able to have a couple of swim recces in the lake during the Do3 organised open water swimming sessions, I felt really comfortable in the water. The swim start was relaxed and cheerful. 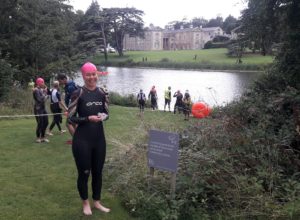 Mike, my husband, was there to cheer me into T1. The wind was picking up and he shouted to put a bike jacket on, but as I was fastening it the zip failed! Another outfit change into the old faithful TC cycle jacket which is a bit baggy and partly covered my race number. Mike shouts “pull your race number out”, but by now I could see the Triathlon England Official looking over, which made me nervous. Was he writing stuff in his little note pad about how chatty and noisy I was being? I hurried to the mount line. 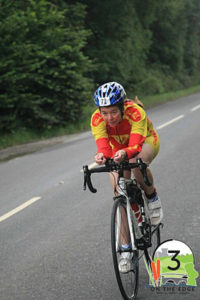 What a beautiful course, I felt so lucky to have this wonderful countryside on my doorstep. I was passed by lots of competitor cyclists, who all said hello and we wished each other well or shared some banter – there was a great community spirit! I approached a junction and the bike official was there, also with note book, my paranoia set in. I remembered what Mike had said about my number and managed to pull my race belt completely over the top of my jacket but by now (not quite knowing all the rules) I had convinced myself I had been disqualified!

There they were, the two officials, now looking friendly and relaxed, so I asked if my lack of race number fully showing at the start meant I was disqualified. They laughed and said no and that I couldn’t use that as an excuse not do the run and they sent me on my way! But not before I had a cup of Tea from my flask in T2– What, doesn’t everyone?! 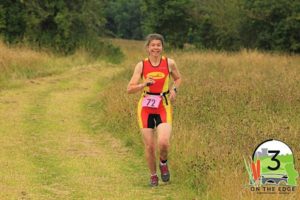 It was a bit of a gamble, but it paid off, as my toe felt OK. I was lucky that some of the course was on grass and across meadows. Just as I started my first lap I saw Denise Shepherd, who was already on her second lap, so I gave her a big wave. I enjoyed the route so much and the support from the marshals was excellent, one even joined me for a small section to check how I was doing. Before I knew it I was at the finish line – but wait, my Garmin said 20.53km and I remembered the wise words from Greg Heath about running extra if needs be. So to the confusion and amusement of the team at the finish line, I carried on and ran around the West Lawn until I reached 21km, a half marathon, then collected my medal! 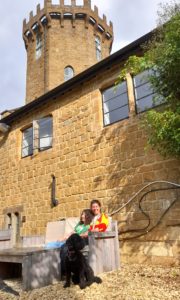 A sprint distance was also available and there was a really good turn out from Team Cherwell – with some fantastic results – well done everyone!

I would definitely recommend this race: its local, the organisation was excellent, Do3 were supportive both before and during the race, the venue and lake is fabulous, the bike and run courses are beautiful and the marshals were some of the happiest and friendliest I’ve come across!

The cycle route goes past The Castle at Edge Hill, its silhouette is on the medal. So there was only one thing for it, some celebratory drinks in the pub before heading home.