On the 14th February Annie and I signed up for RedBull Neptune’s Steps 2017. This event is billed as being one of the toughest open-water swimming events in the UK.

It takes place in Glasgow’s Maryhill Locks and consists of 420m of swimming in water below 9℃ whilst climbing over eight obstacles, a total elevation of 10.5m all against the clock to become the leader of the lock!

We travelled over 346 miles to reach Glasgow; I went with my boyfriend by car while Annie took the train. On the Saturday morning, we met at the Maryhill Locks ready to take part in, what was going to be, a tough race. The weather was overcast, a chilly wind was blowing, and the rain came on and off. As we watched a few of the men’s heats we got our first look at the obstacles we would face, they were very imposing. I stood there shivering; I wondered what on earth I had done by signing up for this! The cargo nets and ladders strung over the lock gaits were huge with dark water cascading over the top. The water churned into a white swirling mass at the base of the gates where swimmers struggled against the current to grab onto the ropes and ladders. 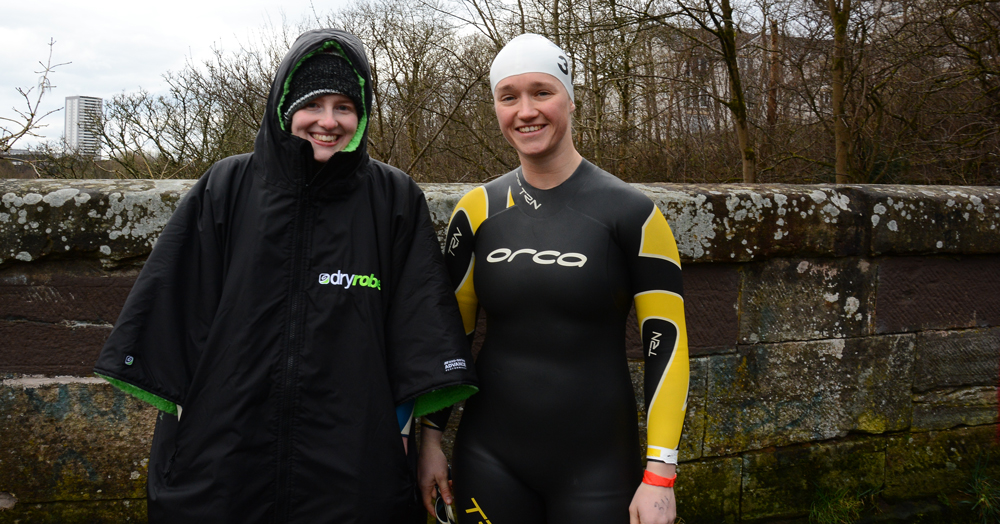 Once registered and changed we headed down to the start. My heat was the first of three for the women with the first 10 finishers progressing to the final where they would have to do it all again! I was feeling sick with nerves by now but the thought of not making it to the finish after coming all this way and doing a lot of hard training was just not an option, somehow I had to do this!

I listened to the race briefing and we were told we had 10 minutes to go and could warm up either in the water or by the side. I knew that getting in the water too early would be a mistake but I needed to get acclimatised to the intense cold before we started. With five minutes to go I slipped into the 7℃ water, the cold was biting hard at my exposed neck and as the water trickled through the zip in my wetsuit I had to take a few deep breaths.

I swam around a little to warm up but it was futile really, this was going to be a very cold 10-15 minutes. I decided to put the cold out of my mind and thought of the warm hot tubs waiting at the finish. My hands were cold even with my gloves on, some people didn’t have gloves and were trying to hold their hands out of the water to stop them burning. A lady next to me was shivering violently and looked quite distressed. 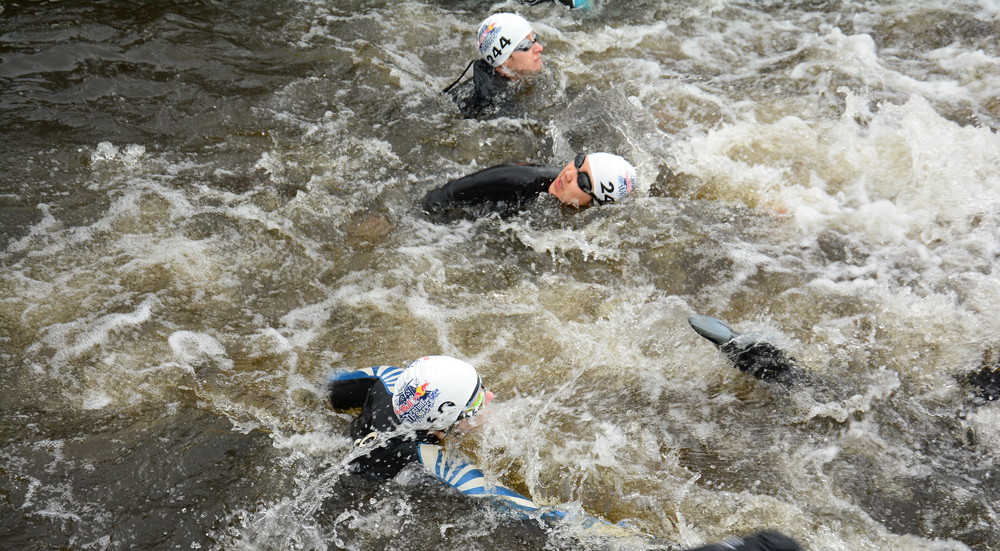 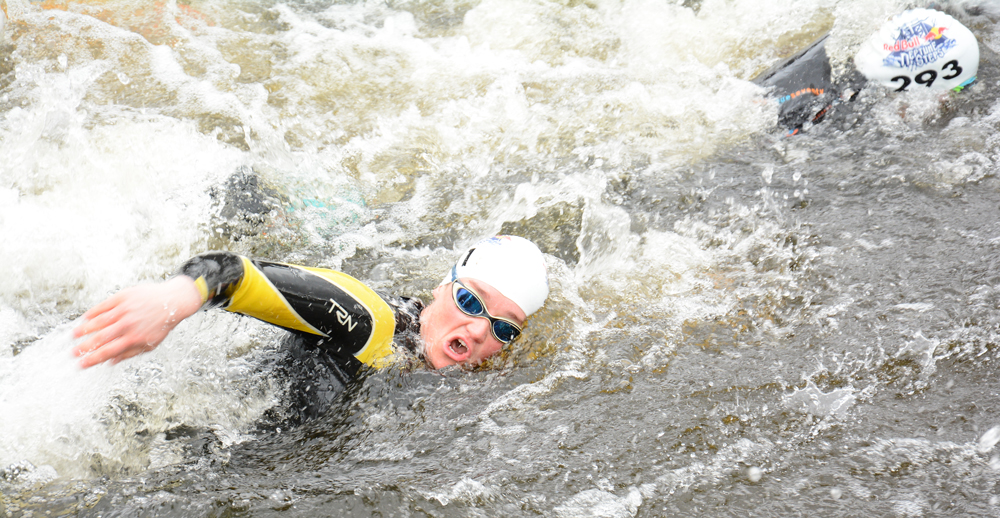 With 30 seconds to go the marshal counted us down. I was trying to get a spot at the front but ended up behind two girls so had to stay back a bit to avoid being kicked. Finally, the starter’s horn blew and we were off. At first it was hard to keep my face down and I mostly swam head up front crawl to the first obstacle…

This consisted of a floating pontoon around 10 feet wide with a cargo net strung across. As predicted I struggled a bit to pull myself up onto the pontoon but managed it, I kept my head down as I crawled across so as not to catch my hat or Goggles on the net. Once across I jumped into the water again and headed for the second big obstacle… 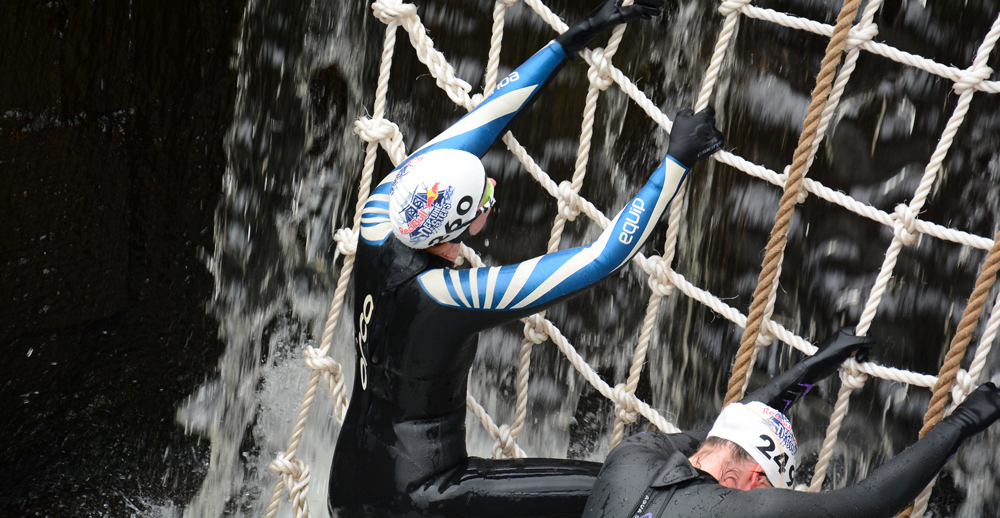 Swimming in the cold water was very hard, although I didn’t feel particularly cold now I could sense the energy being leached out of me. Imagine an hourglass with the sand running out that is the best way I can describe the sensation. I knew there was a limited amount of time before I would run out of energy, I just hoped I would have enough time to reach then end first! I managed to start swimming face down front crawl, though, and as I approached the net, the water splashing over the gate pushed me back. I surged on and grabbed the net, I tried to feel with my feet for a foothold to haul myself up, but there wasn’t one. I pulled myself up using my arms and managed to hook my knee up onto the wooden rod at the base of the net which was just above the water line. I heaved myself up and began climbing. There were quite a few others on the net, and it wobbled around making it hard to climb quickly. I held on tightly, and when I reached the top, I was able to hook my arm over the gate to steady myself. Once over, I wasted no time in jumping back into the water. I wanted to dive, but I was worried about displacing my goggles and flushing my wetsuit.

The next obstacle was a smaller 60cm rope climb, this was still tricky but once up onto the ledge I was over fairly quickly and back in the water now approaching the next big obstacle… 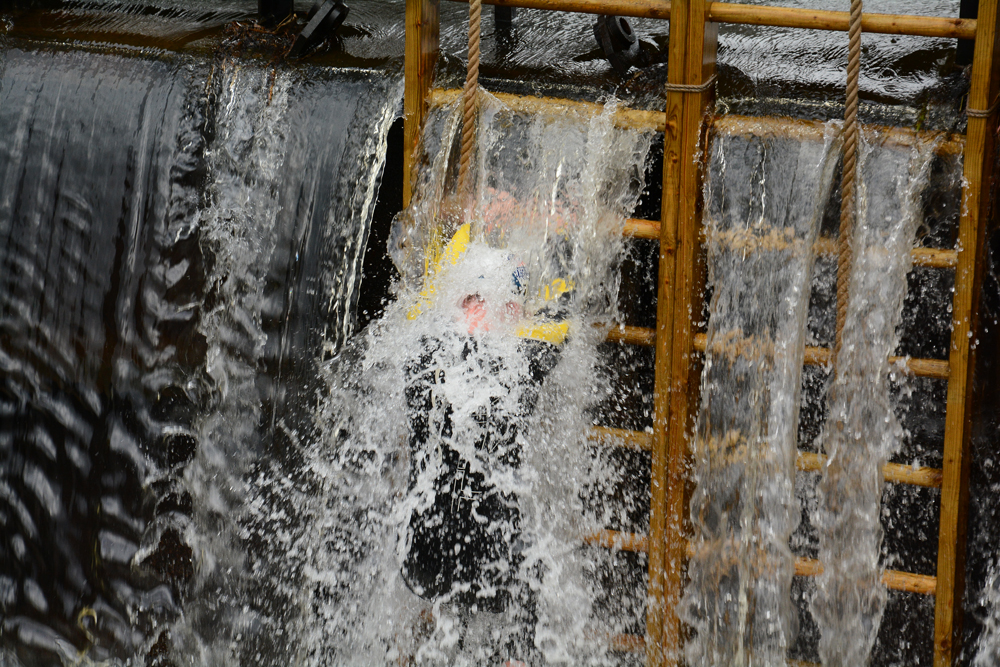 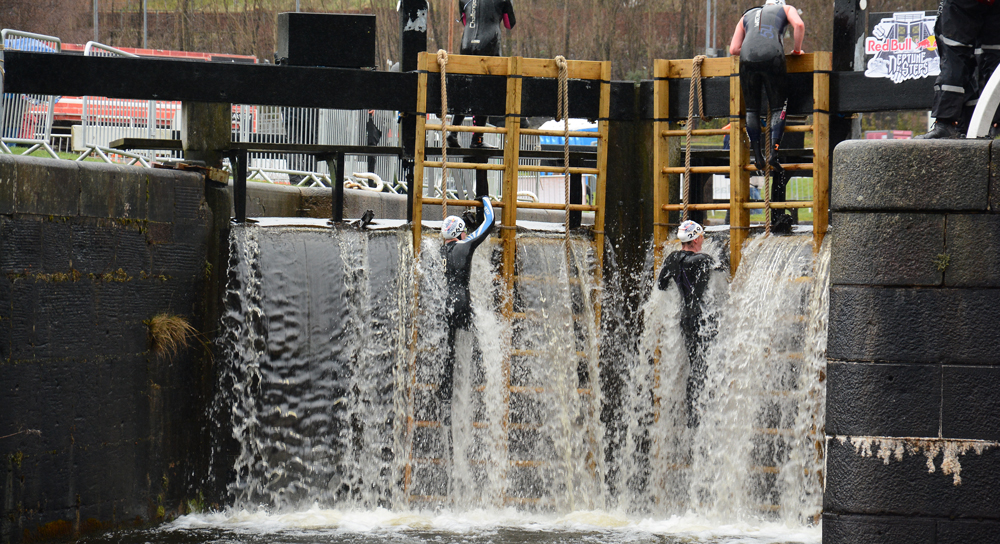 In a change from the previous year, the ladders were now vertical against the lock instead of angled, so the water was pouring right over them. I reached the bottom, again fighting against the rushing water pushing me back and began to climb. The round rungs of the ladder were slippery, and I took it steady, as soon as I started climbing water was pouring on top of me, it was hard to breathe, and I couldn’t see anything. I kept reaching up and eventually broke through the torrent and out into the air again.

The next obstacle was another small 60cm rope climb, once over that I leapt back into the water and started the approach to the toughest obstacle… 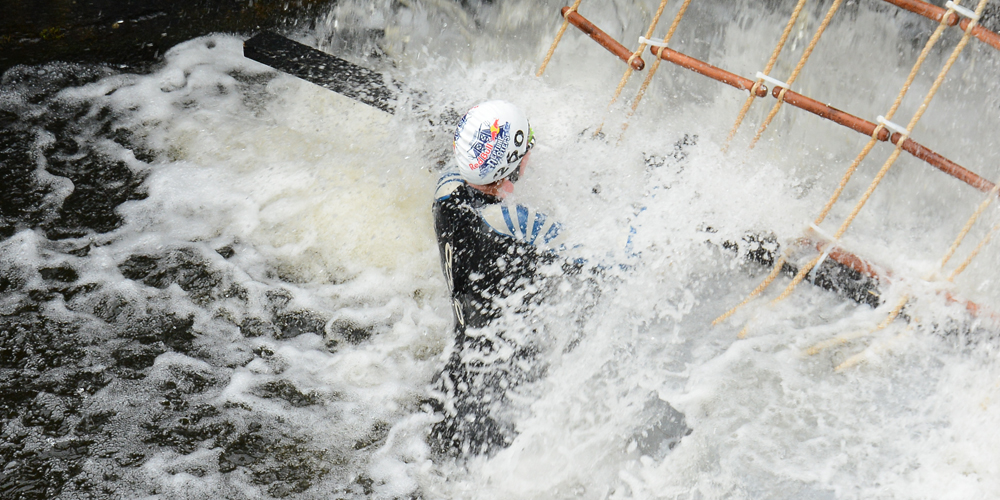 There was another pontoon at the base of this obstacle, and it was very hard to get onto the ladders with the water pushing you off the pontoon. I swam to the left side seeing the rope was flopping over that side close to the water, and I used that to lever myself up onto the pontoon. As I climbed the ladders, they moved around independently, and the water poured down over me again. Eventually, I reached the top and pulled myself over. Another small rope climb and then on to the final big obstacle, I was getting close now!

I was feeling excited, I was almost there, one more to go! I swam into the left again to avoid the churning water in the middle of the gate. Getting up was a little hard as you had to reach up and grab a handhold before getting your feet on the ledge. I began climbing, and for the first time I felt the cold in my hands, it was hard to grip the handholds, so I took it steady. I reached the top, and as my head cleared the top of the gate, I caught my first glimpse of the bright blue finish gantry. I pulled myself over and leapt back in again to tackle the last small rope climb.

THE FINAL ROPE CLIMB & THE FINISH 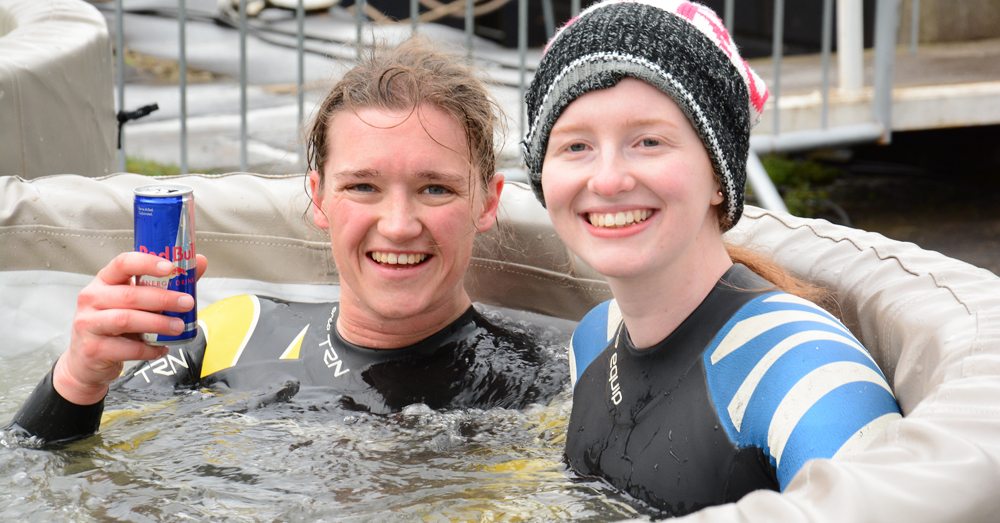 Once up and over I was on ‘show boat bridge’ as it was dubbed by the two commentators and I had done it! I punched the air triumphantly and took a big leap back in to swim to the finish. I crawled out onto the pontoon and once stood up raised my arms, I HAD CONQUERED NEPTUNE’S STEPS!

That feeling was amazing, I was so happy and couldn’t believe I wasn’t last! I had not managed to secure a spot in the final having not been one for the first 10 to cross the line but I had achieved what I had set out to do, I had completed the course in under 15 minutes. Steve was snapping away with his camera above me, and Annie was waiting at the top of the steps to meet me looking excited. We had a quick celebratory hug and then I got my Dryrobe back on. Annie’s heat was up next, so we headed down to the start again to cheer her on.

I would recommend this event for any keen swimmers or someone looking for a different type of race experience. It’s exciting, very challenging and a pretty long way away but well worth it.

Thanks, as always, to my lovely boyfriend for his continual support and encouragement in all things (although he did say he thought I could have swam a bit faster!). Thanks also to Annie who agreed to do this crazy thing with me and shouted loudest of all for me whilst running along the side of a muddy Scottish lock!