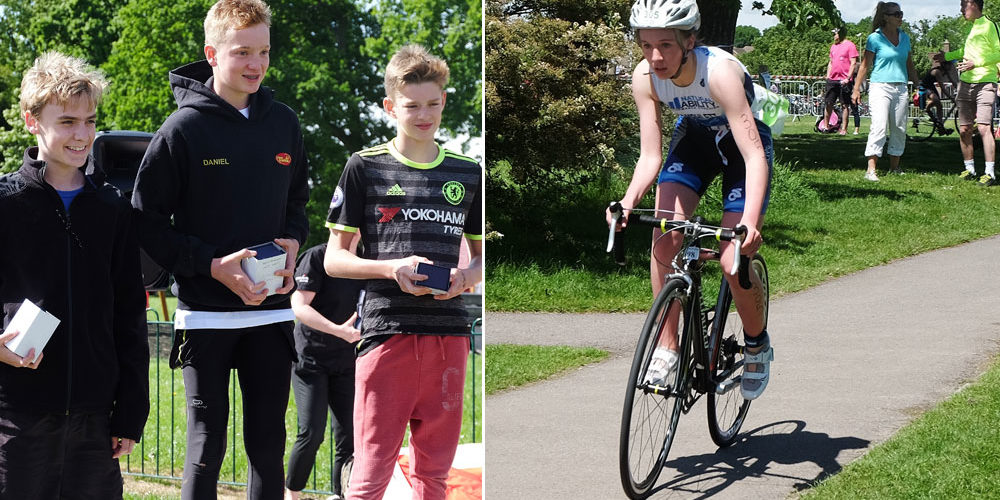 A new venue for round 5 of the South Central Series.  Being somewhat worried about the bike course around the public park area we all took extra time to walk the course and play spot the multiple hazards.  I can say that all of our juniors took it all in their stride and negotiated all that was put in their way e.g. dogs off leads, the general public sharp corners, crossing the run out from transition.  I think you can visualize our worries!

Youths and TS3’s had a free for all swim start which wasn’t seeded, causing some back-ups in the pool!  This was rectified as the other age groups went off.  However, this didn’t put Katie off as she settled into her bike ride and kept making up ground on each lap and put in a strong run to come 2nd.  It was good to see Katie racing with the juniors again as there are not many youth races in the South Central Series.

TS3’s – With 48 juniors getting into the pool in no particular order was frustrating for Daniel and Mabel plus no tumble turns allowed.  Again they both stayed level headed and worked well on the bike course using sections where they could to try and overtake the bunching that was happening on the public footpath.  Daniel finished 1st with another strong run and Mabel crossed the line 6th and was looking stronger on each run lap.

TS2’s  – Corrie and Freya both get stronger each week on their bike element, picking their way through the field.  The run course was a little congested at the beginning with spectators but they both managed to get onto the course and run well.

TS1 – Thomas had a great race for his first year as a TS1 with a fast and furious run to bring him home 8th.

Great day out in the sun.