Stratford Half Marathon – 7th May 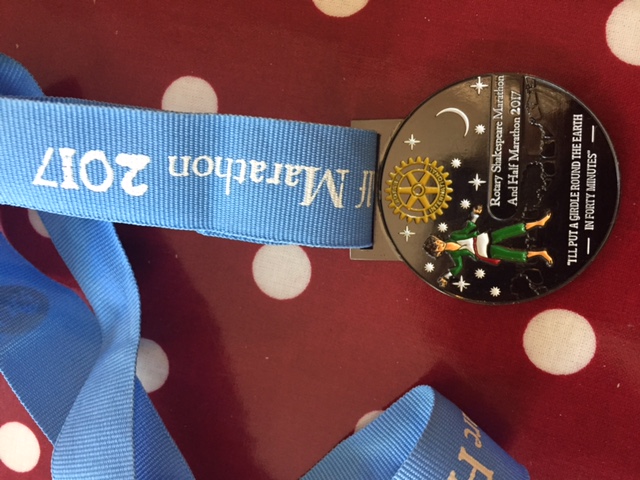 Peering out of the window on Sunday May 7th , I was very relieved to see bright sunny skies and very little movement in the trees: always a good sign on race day.  Stratford Half Marathon is only part of the equation – for those who don’t think a half is enough, there is always the full distance to get their teeth into! Their bibs were red and they wore them with pride – those of us ‘only’ doing the half wore our white bibs with perhaps a little less swagger.

Both races begin in the centre of Stratford – and the streets are lined with supporters and well-wishers.  Parking is easy: arrive in good time and parking at the Butterfly museum car park is very straightforward.  There are also useful loos in the car park if you wish to avoid the portaloos at the start line: unusually these are in plentiful supply.

The race is well attended by lots of the local running club, so it was fun to spot all the different local club vests: Hook Norton Harriers, Cherwell Runners and Joggers – out in force for this one and many other recognisable teams from around this area.

The route itself is well-supported as it snaked round the centre of Stratford, but once the runners headed into the less populated areas of Warwickshire, there were only brilliantly yellow fields of  oilseed rape, other runners and the odd village pub to keep spirits up.  It was apparent at Mile 8 and at the top of THAT hill, that support, in the form of enthusiastic marshals handing out water and gels, was very welcome indeed.

That was the only real hill in an otherwise pretty decent course, undulating but scenic and it was only the last few miles along a dusty track that seemed to go on forever.  I was thankful in the surprisingly hot spring sunshine to be doing the half distance and big respect should go to those who did a second, presumably even lonelier, lap.
The finish line could be heard before it was seen and it was indeed a very welcome sight – along with hundreds of cheerful supporters watching their friends and family cross the line. Job done. Another medal for the collection and, because of the 9am start, plenty of time for a relaxed pub lunch in the sun. A lovely, well-organised and local race.