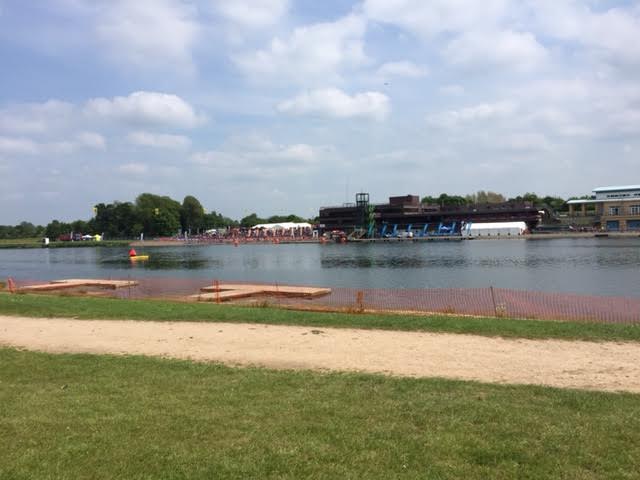 Having completed the Outlaw in 2015, I was familiar with the set up for the Outlaw Half 2016. That said, if this had been my first trip to Holme Pierrepont and its wonderful Regatta Lake, user-friendly transition and efficient organisation, I would have felt in safe hands.

The most difficult part about the whole race was getting in. Selling out in a matter of minutes in August last year, the race landed on my birthday so it was a bit of a no-brainer for me. I filed the confirmation of registration and got on with my life. May was a long way off. Suddenly, however, race day loomed.

Communications were good; emails and Final Race Day instructions were regular, prompt and detailed. This year, though, there was a new £5 parking charge for the weekend which was an unwelcome change. However, the process of acquiring the parking pass was quite painless. Registration was easy, lots of smiley, helpful people – only slight downside: when you were given your race pack, free gels and crisps and parking pass, there was nowhere to put them. A bag might have been useful here as it was quite difficult juggling all the bits and not losing anything important. The Expo was full of tri gear, as to be expected, and lots of Outlaw kit to buy too. Always popular in my view – like Imelda Marcos and shoes, it’s impossible to have too much kit.

The race briefing was well delivered – jokes peppered the sometimes tedious, but essential safety information. It was very thorough and reassuring – if it was your first experience at this distance or at all, I think you would have left fully prepped, clutching a complimentary pint of alcohol free Erdinger which One Step Beyond so thoughtfully provided! If it wasn’t your first rodeo, you would have left equally well prepped and somewhat entertained by the double act of the two organisers (whose names escape me but who imparted a sense of calm and confidence that ALL WOULD BE WELL). They also handled the contentious issue of no Tri Boxes in transition well by providing a bag drop area – every angle had been considered.

Race day was cold. There was no getting away from it. Parking was well organised with lots of marshals on hand. Even at 5am. I tested the organisers’ preparedness by forgetting my race wrist band – not the best start – but that wasn’t a problem: they had spares. And setting up transition was smooth. There were lots of loos. There were smiles and lots of chatter. Nobody was too officious: we had been told transition closed as 6.20am – a few late comers were allowed in. Nobody wanted to spoil the day for any reason.

The swimmers went off in four waves. The water was warmer than the air so it was good to get in. The swim course was impossible to get wrong – straight up and down and a really good experience for beginners, and an excellent, fast course for those pushing for a PB.

Back into transition, having been helped out of the water, a kindly marshal unzipped my wetsuit as I ran (ok, walked) past into T1.

And then onto the bike course; very well marshalled. Again, good for first timers and reassuring for the more experienced. There were a few right turns and these were handled really well. Lots of encouragement from the marshals – they could not do enough. I saw a few athletes with mechanicals but help was on hand. There were a couple of hills and some ropey surfaces but the organisers had spray painted the worst bits – the last few miles of speed humps and pretty uneven surface isn’t much fun, but by that time we were nearly back to T2 and onto the run.

Not the most interesting of runs – but helped along by fabulous support and wonderfully cheerful marshals. At one stop at the far end of the lake when energy was flagging, they were especially fun. I mentioned it was my birthday and got a rousing Happy Birthday chorus which was repeated the second time round as they recognised me: it’s easy to underestimate the importance of support. At the sharp end of the race with another 4 or 5 miles to go – a cheery smile can go a long way.

The finishing chute was fun – it’s tough going past on the first lap – but even sweeter when it’s your turn to become an Outlaw.

A long report – but lots to say about a great race: excellent organisation, fabulous marshals and an event to remember. Also – great medal.