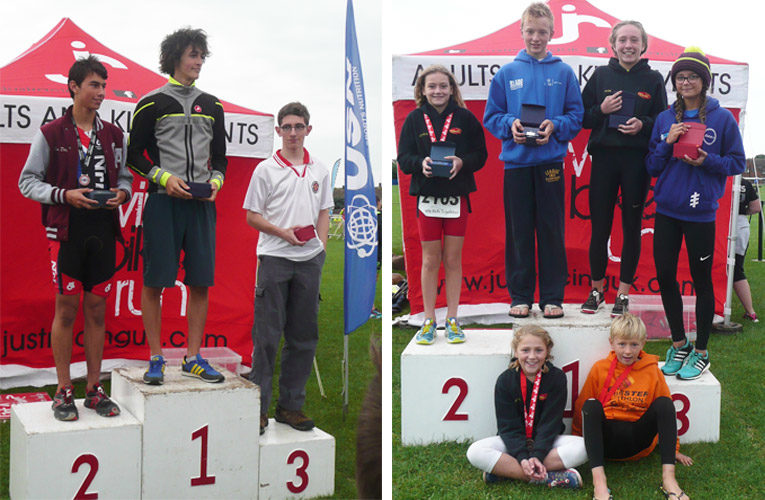 Eight members of the blue headed to Roade for one of the last races of the season.

Race distances were shorter than normal but the juniors gave their all.  The field of racers were especially large for TSS and the TS1’s.

First up for TCJ was Thomas R for the TSS a good bike section and an even more stronger run to come home 3rd in 7.24. Hopefully the trophy is in the post following the mix up on the day of the positions.

Next was TS1 Freya P was flying the flag and meant business and was flying around the bike course and despite a strong run didn’t quite make it onto the podium but a well earned 5th in 12.46.

TS2’S next, persistent springs to mind for the next triathlete Isobel C-A.  Izzy represents the club at the many events throughout the race season and it all came together on the day with the fastest bike out of the boys and girls and finishing with a strong run to come home second in 15.20.

TS3’s the racing was only going to get faster. First into the pool was George C-A who raced well to come home 7th in 20.13. Daniel stamped his authority on all the TS3 field in all disciplines and took  1st in 17.21.  Then it was the turn of Katie and Mabel with only 40 seconds separating them. Mabel started first with a strong swim. Despite Katie having mechanical issues in transition she was out on to the course quickly. Both girls over took other racers on the bike showing their confidence on the bike.  The run was a nail biting affair with Katie pulling back the gap each lap and end with a sprint to the line neck and neck. Both girls made the podium Katie 1st in 19.24 and Mabel 3rd in 20.04.

Youths Blaine C what can I say but poetry in motion on the course and despite losing a cleat shoe on his left foot he peddled bare foot for the duration.  Incidents can happen to a South Central Academy Triathlete, but he just over came the incident and went on to a picture perfect run coming home 1st in 20.08 with 2nd place athlete coming home 3 mins slower.

We would also just like to congratulate the clubs youth members, Blaine Carpenter and Reuben Trotter for earning themselves each a well deserved place in the South Central Academy – You are both great role models for the junior team.  Good luck with all the hard work and training ahead this winter.