This was the second of my events that had been postponed from last year to this.

The event was organised by Always Aim High, a north Wales based events company who run events that are a little bit different and have a challenging final leg: Slateman which is based in Llanberis where the final run is up an old slate quarry; the Snowman based in Plas Y Brenin where the run takes place up and down Moel Siabod; and their final race is the Sandman triathlon based on Anglesey featuring a run through Newborough forest and the final 1 K along Llanddwyn beach.

I was taking part in the sprint which would take place on the Saturday alongside the super sprint and duathlons, with the longer events happening on the Sunday which were standard distance. Legend which is a half iron distance or, if you are crazy enough, the Savage which is the sprint on Saturday followed by the standard event on the Sunday.

Traveling up on Friday gave me a chance to register on the Friday evening and take a look around the bike route and gauge the entry and exits in transition. 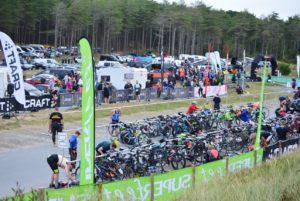 There seemed to be a good mix of new triathletes and more experienced in transition, with those pre race nerves showing for the event briefing – given over the pa in a mixture of English & Welsh. One good point was the recycling points and/or passing empty gel wrappers to marshals for depositing into boxes for recycling by High5, they said this was the start of this process to recycle these wrappers as unfortunately you always see these on the road or run when doing triathlons despite the threat of instant DQ’s for littering. Hopefully this will appear at more and more events.

The sea had thankfully calmed down from the rolling waves that greeted me on the beach on Friday night and looked calm.

We had the chance for a brief acclimatisation swim before the event started, not something that you normally get a chance to do, with the temp at an advised 16 degrees, but felt warmer.

The swim started with a small run off the beach into the sea for the 750 meters – I started well manging to keep with a group all on the same sort of pace. 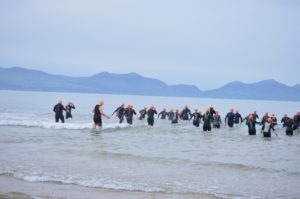 Unfortunately, a head movement at just the wrong time was met with a wave and a mouthful of sea water which meant the next few moments were a mixture of trying to regain my breath and get back into a rhythm.

Turning around the 2nd bouy the tide started to repay the resistance on the way out and drive me forward towards the beach, manging to just stay in front of someone who started in my wave and mixed in with the wave behind, swim done in a chip time of 28.24, a bit slower than I wanted but sea swimming is always going to be a different to lake or river swimming.

After my exploits around the Howardian hills in July I was thankful to find the bike course somewhat flatter in Anglesey.

Running along the sand for the first time out of the swim it became obvious the 1k beach run later was going to be a challenge.

Off the beach and into transition: off the wetsuit came, helmet and number on and heading towards the exit, the start of the bike was up the road leading away from the beach car park over numerous speed humps which would also be a feature on the return leg in. 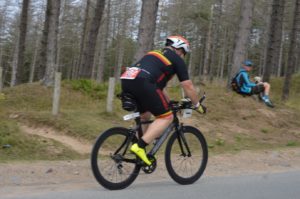 Out the top of the road and heading towards the village of Newborough, where the locals were out supporting.

The first part was fairly straight and smooth which allowed me to get some speed up and into the aero position and overtaking a few of those that had were ahead of me.

The middle part of the lap was on narrow single-track roads which were marshalled well and I met no oncoming traffic, again managing a few more overtakes when safe to do so.

The single loop went past quickly with a few more overtakes coming back into the village and down the road leading to the beach, having to slow significantly to go over the speed bumps to reduce the normal vehicle traffic speed on this narrow and twisting road.

Bike was done in 1hr 01, would have liked to of dipped under the hour but I know going careful and steady over those speed humps undoubtedly cost me a little time.

Racking the bike and slipping on the trail shoes it was off out on the run, first part was a nice little down hill section which gave the legs a chance to wake up a little from the bike. 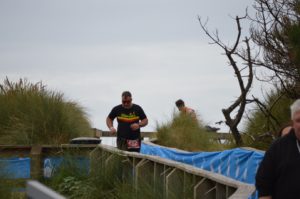 Then it was off on a 2.5k (according to Strava) section which gradually kept rising up and up winding its way through the forest paths and fire breaks of Newborough forest, again great support from the on-course marshals.

Crossing the main road on to the other side of the forest heading towards the beach after a final set of paths through the forest dodging tree branches that lined the paths making sure not to catch an ankle.

Turning onto the sand path that led to a small dune section before turning onto the beach proper, as the tide had gone out by this point, I made my way towards the harder sand to make the run a bit easier before having to get back onto the soft sand before coming off the beach on to the walkway to head to the finish.

Crossing the line with a run time of 58.17, again a bit longer than I would have liked but running on sand certainly takes more effort than normal.

Overall time was 2.36.01, not the quickest but I wasn’t last either, and for me its about completing events rather than competing. 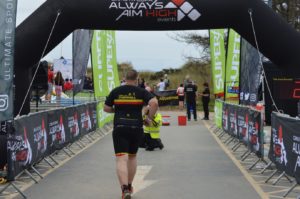 Now a long winter lies ahead as I have entered the Cotswold 113 middle distance event in June next year, so lots of training to be done, it will be my first attempt at this distance but I’m up for the challenge, even though at this point the distance scares me silly!

I would highly recommend this event and the scenery in North Wales is absolutely stunning.